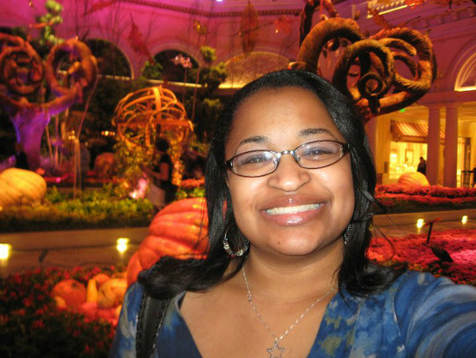 Age: None of ya business!

Favorite Hobbies:  I absolutely love to cook, and I relish in boring my friends with my kitchen adventures.  I may post a few recipes from time to time.

Favorite Food:  French fries, cheese, bacon.  Preferably served at the same time.  I basically love anything that’s bad for you.

Tattoos:  It sounds badass to say that I have 11.  They are stars of varying sizes on my wrist ala Rihanna, though I had the idea for years before her.  I hope to add to my collection soon!

Why did you Start Small Screen Girl?:  I have a lot of thoughts and feelings about television and pop culture, and I wanted to share that with people on my terms.  I would love for this site to become “The Huffington Post” of television but my main goal is to find a niche group of people who love to fangirl as much as I do.

Did you want to become an actor?:  Who doesn’t?!  I want the gravitas of Viola Davis, the frame of Kerry Washington; the fearlessness of Meryl Streep; the comedic timing of Mindy Kaling, and the paycheck of Robert Downey, Jr.

Favorite Book:  "Harry Potter And the Order Of The Phoenix"

Favorite Movie: It changes monthly. It's currently "Captain America: The Winter Soldier" and "The Bourne Ultimatum.”  I love every genre of movies, except horror.

Favorite TV Show:  Why must you torture me so?!  I’m obsessed with the television.  I love the variety and how it’s there whenever you need it.  I can whittle it down to a Top 5: "Supernatural," "Outlander," "Parks and Recreation," "Brooklyn Nine-Nine" and "Friends."  I could easily add about 14 more.

Favorite Reality Show:  I'll watch pretty much anything except bottom-rung shows like “Storage Wars,” “Dance Moms” or “Duck Dynasty.”  I try to limit my reality TV watching because now the stars understand the power they have, and it’s not reality so much as it is troublemaking for a paycheck.  But there honestly isn’t anything better than lazy weekend afternoons watching marathons on Bravo!.  My favorites are "Blood, Sweat and Heels," "Project Runway," "Top Chef," "The People's Choice," and "Shahs of Sunset."

Favorite Musicians:  I've been an NSYNC/Justin Timberlake fan since the day I second I saw him perform way back in 1998.  His music provided solace when I needed it and gave me so much life.  It has helped me become the person I am today and how I met my best friend of more than a decade.  I'm also healthily obsessed with Christina Aguilera and P!nk.

Favorite Actors:  Too many to name but Mahershala Ali has been at the top of that list for awhile.

Best Celebrity Encounters:  I don’t want to name-drop but I’ve had a handful.  Most of them were accidents or dumb luck.  I have had the bizarre pleasure of Justin Timberlake in a gorilla costume.  That is another story.

Craziest Thing You’ve Ever Done:  1) Writing a novel before I was 25.  2) Flying to Vegas with four days notice and spending a night on the strip without a hotel room so I could attend the final shows of Justin Timberlake’s “The 20/20 Experience World Tour.”  I got about 10 hours of sleep in 3 days and returned home utterly broke, sick as a dog, happy as a clam and with the world’s best souvenir.  (Hint:  I’m the nerd in the silvery sweater). 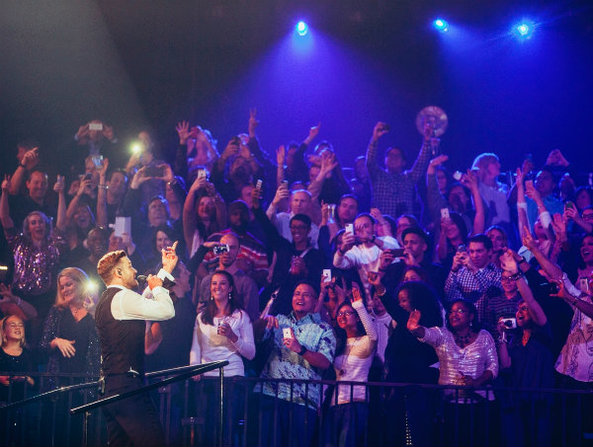 Least Favorite Celebrities:  There are some celebrities whose talents I don't understand or are overhyped but I can admire almost anyone's hustle.  I have no loyalty to racist/homophobic/misogynistic/culturally appropriative people, celebs included.

Lesson You Refuse To Learn:  Act your age.

Best Lesson You’ve Learned:  1) “You only need one ‘yes’.” –Courtesy of my mother when dealing with rejection.  2) “People are stupid.” –Courtesy of my high school cheerleading coach when stressing the importance of communication.  3) “Why not me?” –Mindy Kaling.

Can I contact you?:  I encourage, nay beg you to!  The site is new, and I would love to know what you think.  I also love talking about television, movies are the latest celebrity gossip.  If I watch the show, I’d love to engage with you!   Email me (smallscreengirl@gmail.com), Like SSG’s Facebook page or follow me on Twitter and Tumblr!

INTRODUCTION TO A SMALL SCREEN GIRL

I have always been infatuated with television.  One of my earliest memories of television was in daycare, I had to be three or four.  After lunch, my daycare teacher, Ms. Smith, would tell us that we could watch TV as long as we were quiet, but if we talked or misbehaved we had to take a nap.  One-by-one kids were sent back to their cots, and I remained cross-legged and transfixed on “Sharon, Louis’ and Bram’s Elephant Show” or “Reading Rainbow.” I know, I totally dated myself.

My first memory of specific entertainment was falling into hysterics when Michael Jackson turned into a werewolf in “Thriller.”

When I couldn’t sleep, I would replay my favorite TV shows or imagine inventing about inventing a television that I could watch in bed.  Now, I just roll over and watch Netflix on my phone.  What a time to be alive!

My journey to becoming an entertainment writer truly started in high school.  I had always expressed myself through writing, and my inspiration to write has always been rooted in television shows.  In high school, I was selected by my journalism teacher to write a movie review that was published in the young talent section of my city’s newspaper.  Normally, they kept the opportunities open to different students in schools throughout the district, however, the editor liked my writing so much she continued to ask me to write other articles, including a feature on director Spike Lee.

I had already dreamed of becoming a director, actor or a writer, and this was proof that I could actually do it.

Around the same time, “MTV’s TRL” and *NSYNC’s rising popularity was the gateway to my discovery of the awesome power of the Internet, the fascinating intricacies of celebrity and the magic of fan fiction.  And through it all, I always carved out room for television.  My friends celebrated my birthday by decorating my locker with “Buffy The Vampire Slayer” photos and scripts.  “Felicity” ignited my love affair with New York City.  “Dawson’s Creek” sparked my life-long crush on Joshua Jackson.

Fast forward a few years, a few crazy celebrity-centric vacations, (more on that later) and one recession, and my dreams of moving to New York City were backburnered for post-college, shitty-economy survival.  I swapped my English major for a Journalism degree with a marketing and advertising focus.  I took the first job I was offered out of college, which involved creating marketing plans for clients in the Yellow Pages.  It was even more tedious and soul-crushingly boring than it sounds.  I was eventually downsized—thanks recession!—and that led to an aggravating string of temporary jobs and bouts of unemployment.

With little money and too much time on my hands, I started cooking insanely elaborate meals to stave off insanity.  Who doesn’t want braised short ribs with roasted vegetables and a sweet potato cake on a Tuesday night?  I indulged my restlessness and my creative spirit by starting a food blog, which led to blogging for Starpulse.com, an entertainment website. I’ve since parlayed that into a gig as a freelance food writer for the same newspaper that published my movie reviews a decade earlier.

My articles have been featured on Google Entertainment, and even commented on and retweeted by EPs of “Hawaii Five-0,” “The Mindy Project” and “Supernatural.”

What is a Small Screen Girl (Or Boy or Person)?

A Small Screen Girl (Or Boy Or Person) is anyone who unabashedly and wholeheartedly loves television.  It’s not just regularly watching TV shows; it’s the fan who parses the nine-second preview of next week’s episode for the tiniest spoilers, who reads or writes episode recaps, who may even fix problematic canon by imagining or writing a solution.  It’s the person who may cry over a death; fire off angry tweets after shark-jumping arc; or hosts viewing parties for their favorite shows.

It’s the person whose DVR is constantly recording, and their idea of a sublime Sunday afternoon involves emptying out said DVR and/or reblogging gifs of their favorite shows.  It includes following your favorite actors/celebrities on social media, and even attending conventions (or being upset that you can’t afford to attend said conventions).  It encompasses all of the wonderful, fanatical actions of someone pathologically obsessed with television.

A Small Screen Girl (Or Boy Or Person) is an unabashed pop culture and TV-aholic with no plans of ever seeking treatment.  Explore this blog and see just how deep my obsession goes.  There’s no judgment here, just camaraderie and support.

On this blog, you will find my musings on television, movies and pop culture.  Expect haikus about my new and old celebrity crushes—Chris Pratt and Justin Timberlake, respectively—in-depth analysis of the state of Jared Padalecki’s hair in the latest season of “Supernatural”; listicles of why I wasn’t remotely upset by McDreamy’s death, and invitations to live-tweet shows with me.

You will also find recaps, reviews and gripes about all the television shows I regularly watch, which are (in no particular order): Outlander, Supernatural, Grey’s Anatomy, Scandal, Empire, Black-Ish, most things Bravo!, General Hospital, Jane The Virgin, Arrow, The Flash, Sleepy Hollow, Brooklyn Nine-Nine and more!